To share your memory on the wall of Richard Furda, sign in using one of the following options:

He retired in 1986 after 32 years with Western Electric in Kearny and New York City, and AT&T in Morristown, as District Manager.

Rich was an accomplished athlete in basketball and baseball at St. Patrick’s High School. He achieved several H.S. and College basketball championships, including an athletic scholarship from LVC. Rich was co-captain of the 1952-1953 LVC basketball team that advanced to the NCAA Sweet 16 for which they were nationally heralded as the Cinderella team beating Fordham. A book was published in 2007 that commemorated the teams’ accomplishments as well as recognition in the Sports Illustrated “College Basketball Book”. Rich was an avid golfer (he hit a 76 on his 87th birthday!) and charter member of the Eagle Ridge Golf Club. Rich was also an avid reader.

Surviving is his wife Stella, his children Michael Furda and Sandra Hurd and her husband Howard, his granddaughters Stephanie Hurd and Kate Ness and her husband Geoff, his brother-in-law Cas Golda, sister-in-law Betty Golda, nieces, nephews and cousins and extended Aravecz and McCauley families. He is pre-deceased by his beloved daughter Jennifer, his parents George and Anne, and brothers George and Robert.

Rich was a devoted, warm-hearted, faithful, caring man. Furthermore, he had a knack for interesting and intriguing life and political conversations supported by the 1000 books per year he would read. Family and friends, including his golf group, were so important to him.

Funeral arrangements under the direction of Mastapeter Memorial Home in Bayville, NJ. A Funeral Mass will be held at the Church of St. Luke, 1674 Old Freehold Road, Toms River, NJ on Friday, July 10, 2020 at 10:30am. Masks and social distancing will be enforced.

To plant a memorial tree in honor of Richard Furda, please visit our Heartfelt Sympathies Store.

Receive notifications about information and event scheduling for Richard

Print
A Funeral Mass will be held at the Church of St. Luke, 1674 Old Freehold Road, Toms River, NJ. Times to be announced. Masks and social distancing will be enforced.

We encourage you to share your most beloved memories of Richard here, so that the family and other loved ones can always see it. You can upload cherished photographs, or share your favorite stories, and can even comment on those shared by others.

Posted Jul 11, 2020 at 02:22pm
Aunt Stella, Mike and Sandy, I’m so sorry for your loss of this amazing man. I have been blessed he was my God father, my Dads lifelong best friend, an example of faith, love, friendship and strength and just an all around great guy! What a reunion in heaven this has been! I know we will all be together again. All my love, Sharon Eileen
Comment Share
Share via:
C

Posted Jul 08, 2020 at 01:07pm
Aunt Stella, Sandy and Michael-
Not sure how to explain the total family love I have for all of you. You are my family. I am amazed at the family that Rich, Ed and Roy created for us. We are beyond lucky to have this extended family of love and support in our lives. To say I will miss him is an understatement. He was a beacon of light, joy, laughter and wisdom.
Claire Ann
Comment Share
Share via:
MZ

Posted Jul 01, 2020 at 05:12pm
Stella, Michael, and Sandy--
We are deeply sadden to hear the passing of Rich.
Now is the time for gathering all the best of a good life into the pages of memory, to be held in your
hearts forever. In this difficult time, please know our thoughts and prayers are with you and your family.
Pauline, Michele, & Mike Zurat

Posted Jun 27, 2020 at 10:37am
Aunt Stella Michael and Sandy I am so sad to hear of the passing of Uncle Rich. He was a solid member of our family and always had time to talk when I would see him. Uncle Rich please let my partner in crime-Jennifer- know I miss her and think of her. Until we meet again💞
Comment Share
Share via: 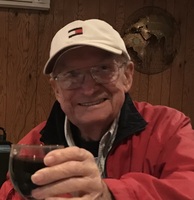