To share your memory on the wall of John Michael Dillon, sign in using one of the following options:

Print
John M. Dillon, 62, of Toms River passed away on Saturday, August 22, 2020. Born in Jersey City, he moved to Ortley Beach with his young family before ultimately settling down in Toms River. He did not die of COVID-19.

He met and began... Read More
John M. Dillon, 62, of Toms River passed away on Saturday, August 22, 2020. Born in Jersey City, he moved to Ortley Beach with his young family before ultimately settling down in Toms River. He did not die of COVID-19.

He met and began dating his future wife, Kathie at the age 15. John was a great husband, father, and grandfather. He was a diehard New York Football Giants and Yankees fan and enjoyed arguing very loudly about his teams. His work ethic was a marvel to all that knew him. He also enjoyed fishing and busting the chops of his children but most of all, he enjoyed spoiling his grandchildren. He will be sorely missed. He was predeceased by parents John and Margaret; his brother Thomas; and his sister Barbara.

A viewing will be held on Wednesday, August 26, 2020 from 2pm – 4pm & 7pm – 9pm at Mastapeter Memorial Home, 270 Atlantic City Blvd., Bayville, NJ 08721. Funeral will be held on Thursday, August 27th at 9:30am in the funeral home before leaving to celebrate an 11am Funeral Mass at St. Barnabas Church in Bayville.
Read Less

To send flowers to the family or plant a tree in memory of John Michael Dillon, please visit our Heartfelt Sympathies Store.

Receive notifications about information and event scheduling for John Michael

We encourage you to share your most beloved memories of John Michael here, so that the family and other loved ones can always see it. You can upload cherished photographs, or share your favorite stories, and can even comment on those shared by others.

Carolyn and Emilee, Jimmy ,Tracee ,Lenny, Elisa, Joey, Ed, Rob,& Justi, and other have sent flowers to the family of John Michael Dillon.
Show you care by sending flowers

Carolyn and Emilee purchased flowers and planted a memorial tree for the family of John Michael Dillon. Send Flowers

Flowers were purchased and a memorial tree planted for the family of John Michael Dillon. Send Flowers

Posted Aug 25, 2020 at 10:05am
My Deepest sympathies in this time. I worked with John at Lowe's for about 10 years. Was he loud? Oh yeah. He really knew how to put someone in their place. I really admired him for that. He was a great guy to talk to. Boy was he fun! May his soul find peace.
Comment Share
Share via: 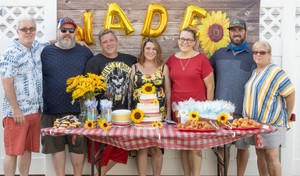