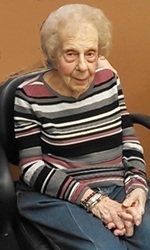 Rose was born to Joseph and Antonina Lucchese in New York City in 1913. Three years later Rose, her parents and older sister, Mary, moved to the “country” because malaria was spreading in New York City. The “country” was Bayonne, NJ, where she and her family became lifelong residents. In 1950 Rose’s grandfather, Gaitano Macaluso, was the oldest person in Bayonne (Age 102). In 2020, Rose was perhaps one of the oldest, if not the oldest, person in Bayonne. She passed away last week at the age of 107.

Rose attended Washington School and Bayonne High School and went on to get her teacher’s license from Harriet Melissa Mills Training School for Kindergarten and Primary Teachers in 1933 and her Bachelor of Science Degree from Columbia University in 1938. She also was elected to the Bayonne YWCA Board of Directors in 1938. Rose started her teaching career as the Head Teacher at Bayonne Nursery School in 1935. She spent the remainder of her 36 year teaching career as a kindergarten teacher for the Bayonne Board of Education. Most of those years were spent in Number 3 School. Many Bayonne residents will remember her as their kindergarten teacher.

During World War II she also worked part time as an ambulance driver for the Red Cross Motor Corp, transporting wounded soldiers to Bayonne Hospital as they arrived at the docks in New York City. During this time period she also worked at Elco Dynamics where she helped build electric motors to be used on PT Navy boats. She also enjoyed spending time and going on outings with her sister Mary’s five children.

After the War she met and married Salvatore Garatina in 1946 and they remained together until his passing in 1993. They had one son, Douglas, and two grandsons, Thomas and James. Rose was also blessed with four great grandchildren, Chloe, Kaylee, Roman and Samantha. She was a loving and much loved mother, grandmother, great grandmother, mother-in-law to Doug’s wife, Virginia and grandmother-in-law to Michelle and Christina Garatina.

Rose was an avid reader and knitter who loved to travel. She had a long and wonderful life and maintained her cognitive abilities throughout her lifetime. Nonna Rose will be greatly missed and fondly remembered by all who knew her.

A viewing will be held on Wednesday, September 2, 2020 from 12pm – 3pm with a prayer service at 2:30pm at Mastapeter Memorial Home, 270 Atlantic City Blvd. Bayville, NJ 08721. Burial will be private with the immediate family.