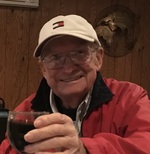 Rich (Richie) Furda, age 89, died peacefully at home on June 22, 2020 surrounded by his wife, son and daughter. Born in Elizabeth, New Jersey, he lived in Scotch Plains, Middlesex and Bridgewater before moving to the Fairways at Lake Ridge in Lakewood. He was a graduate of St. Patrick’s High School and Lebanon Valley College (LVC). He served in the U.S. Army - SCARWAF (Special Category Army with Air Force) from 1953-1955, with 18 months of service at Dreux Air Force base in France.

He retired in 1986 after 32 years with Western Electric in Kearny and New York City, and AT&T in Morristown, as District Manager.

Rich was an accomplished athlete in basketball and baseball at St. Patrick’s High School. He achieved several H.S. and College basketball championships, including an athletic scholarship from LVC. Rich was co-captain of the 1952-1953 LVC basketball team that advanced to the NCAA Sweet 16 for which they were nationally heralded as the Cinderella team beating Fordham. A book was published in 2007 that commemorated the teams’ accomplishments as well as recognition in the Sports Illustrated “College Basketball Book”. Rich was an avid golfer (he hit a 76 on his 87th birthday!) and charter member of the Eagle Ridge Golf Club. Rich was also an avid reader.

Surviving is his wife Stella, his children Michael Furda and Sandra Hurd and her husband Howard, his granddaughters Stephanie Hurd and Kate Ness and her husband Geoff, his brother-in-law Cas Golda, sister-in-law Betty Golda, nieces, nephews and cousins and extended Aravecz and McCauley families. He is pre-deceased by his beloved daughter Jennifer, his parents George and Anne, and brothers George and Robert.

Rich was a devoted, warm-hearted, faithful, caring man. Furthermore, he had a knack for interesting and intriguing life and political conversations supported by the 1000 books per year he would read. Family and friends, including his golf group, were so important to him.

Funeral arrangements under the direction of Mastapeter Memorial Home in Bayville, NJ. A Funeral Mass will be held at the Church of St. Luke, 1674 Old Freehold Road, Toms River, NJ on Friday, July 10, 2020 at 10:30am. Masks and social distancing will be enforced.