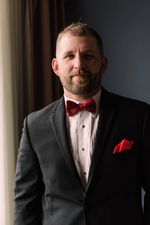 Anthony M DeGraw, 33 of Beachwood, died suddenly on November 7, 2019. Born in Wayne, NJ and raised in Lodi where he met the love of his life and middle school sweetheart Krystal Anderson in 2000. He graduated from Lodi, HS in 2005. Together they moved to Beachwood two years ago. Mr. DeGraw was a granite stone installer and was recently employed with Progress Dimensions in South Toms River. Anthony was an avid outdoors man and hunter. He loved riding his motorcycle and off-road quad. He was a devoted Giants fan. He was predeceased by his daughter Paige Ellen Degraw in 2014 and also by his grandfather John Ruehle in 2004 and by his Aunt Lisa in 2018.

Visiting hours will be Thursday, Nov. 14th, from 6pm to 9pm, with a Prayer Service at 8:30pm, in the Mastapeter Memorial Home, 270 Atlantic City Blvd., Bayville. In lieu of flowers, contributions to their daughters College Fund; Haylee DeGraw, would be appreciated. Donation information will be available at the funeral home.