To share your memory on the wall of Angela Chiappelli, sign in using one of the following options:

She made her name as a contemporary country pop singer described as, “Janis Joplin sings country.” Her songs were songs of strong women with fierce personalities battling unhealthy relationships while simultaneously exposing their vulnerability. Gifted from an early age she was a piano virtuoso at the age of five. She was also an accomplished choreographer who danced from the age of two. This multifaceted multitalented SAG actress appeared on tv shows, commercials, films and concerts. Described as exciting, ethereal, and heartbreakingly talented she was said to have the comedic timing of Goldie Hawn and the heart and warmth that Marilyn Monroe and Judy garland possessed. Joseph Chiappelli, was not only her father but her, muse, as well as the most important influence in her life. Their love of music became a dream realized when they formed their own band together called Anjelia and The Boy. Angela was a bright light in an otherwise dim world who truly touched the lives of everyone she met. She will be deeply missed by all who knew her.

Visiting hours will be Thursday, Jan. 16th, from 6pm to 9pm, at the Mastapeter Memorial Home, 270 Atlantic City Blvd., Bayville. Funeral Friday, 8:30am at the funeral home or meet at St. Justin’s Church, 975 Fischer Blvd., Toms River to celebrate an 10am Funeral Mass.
Read Less

To send flowers to the family or plant a tree in memory of Angela "Anjelia Pelay" Chiappelli, please visit our Heartfelt Sympathies Store.

Receive notifications about information and event scheduling for Angela

We encourage you to share your most beloved memories of Angela here, so that the family and other loved ones can always see it. You can upload cherished photographs, or share your favorite stories, and can even comment on those shared by others.

Posted Jan 17, 2020 at 06:45pm
To the family of Anjelia,
I met her through a mutal friend, Alyson. She was so talented and beautiful. Anjelia and I had a good laugh watching Alyson sign her name on three 20 year old boys at a bar in Philadelphia when she posed for a calendar. Angelia will live on through her music.

Posted Jan 16, 2020 at 10:41pm
We Remember Angela growing up as a Beautiful little girl getting on the school bus with her Mom Mary by her side on Utah Drive,Toms River NJ😢God Bless Angela She Now An Angel In Heaven🙏🎈🌹❌⭕️
Comment Share
Share via:
AV

I’m so sorry, and I have been beyond devastated over Angela’s untimely passing. Still, I’m struggling to process, that Angela is no longer with us. We all loved her dearly. Even fans, whom had never known her on a personal level, could feel her sweet, magnetic presence.

I admired Angela for the fact, that she never gave up on chasing after her passion, her music. She was an undeniably kind-hearted and talented spirit, who had possessed a glorious beauty, which not only illuminated from the outside, but also from deeper within. She always tried to instill confidence and hope within me; regardless of how many times our chronic diseases had affected us both. And with those matters between us, we had related to one another. I’m so sorry that I couldn’t make it there.

Each and every day, she will missed. May she be reunited with her beloved father, Joe.
Granted, Angela was too good of a person for this universe; however, she did not deserve to leave it behind.

From the first time we saw her as Anjelia and The Boy at Val's in Rumson in the early 2010s to her return to the Asbury area music scene just recently, she was a bright, shining, charming ray of light who stood out in a scene that had many bright lights.

I did get to perform with her a couple of times and see her several times and she always left us wanting more.

A lot has been said of her beauty and talent, and while those are indisputable, they are not the first impressions that come to my mind when I think of her. You meet more than enough attractive looking people, and many who are talented.

I think mostly of her kind and gentle disposition, and thats what hurts the most, because those traits are what are most missing in this biz. 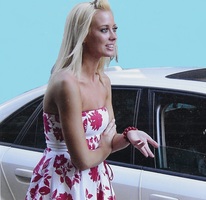